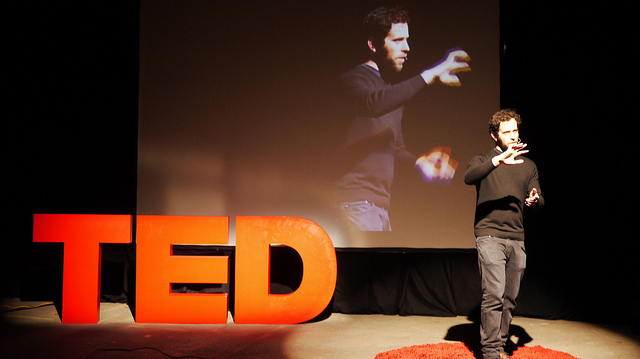 The brilliant people at TED are talking about Training. Here are five TED talks, on topics ranging from post-industrial economics to dancing tango, with valuable eLearning takeaways.

“Math is very important, but so is dance.”

Ken Robinson is calling for a revolution in education. For the past hundred-and-fifty years, our schools have functioned sort of like factories ‘producing’ good little worker bees. This model works in an industrial economy but makes absolutely no sense in the digital age.

Good training respects a variety of learning styles. It’s about creating a space where students can explore rather than conditioning them to tick boxes and follow instructions.

Dan Pink: The Puzzle of Motivation

“The solution is not to do more of the wrong things.”

A scientist by the name of Sam Glucksberg did an experiment to test what motivates us. He gathered two groups of test subjects and gave them a logic problem to solve. He told the first group a little about the experiment, he let them know they would be timed. The second group was offered hard cash if they solved the puzzle quickly enough.

The results were the exact opposite of what you might think. The group with cash incentives performed far worse. The scientists couldn’t believe it either, so they repeated the experiment in rural India, where the cash prize might be a little more meaningful. But the outcome was the same.

It turns out that ‘if-then,’ or contingent, motivators work great for mechanical skills and ditch digging, but they actually lead to poorer performance when it comes to creative skills.

We’re overdue for a paradigm shift when it comes to incentives, because the 21st century needs creatives, not obedient drones.

Innovators and creatives need to know why they’re learning.

Purpose comes before payoff. And forget about lame prizes for completing your mandatory training.

“Everyone needs a coach.”

And now, a word from the richest man on earth… He came to TED with a simple question: how can we give teachers better feedback? Bill Gates wants to know why everybody else gets feedback to improve their skills–tennis players, gymnasts, basketball players–but not teachers.

Being Bill Gates, he has literally billions of dollars to invest in a solution, and that’s exactly what the Bill and Melinda Gates foundation has been working on.

But one answer to the feedback problem is completely free. You simply have to ask for it, and ask the right questions.

We all remember those horrible training videos in driver’s ed. Whoever made those probably didn’t ask for much feedback.

Our training is only as effective as our follow up. We need to have an ongoing conversation about what works and what doesn’t.

“A computer doesn’t get tired of showing the same video five times.”

Time for a pop-quiz:

How long would it take a Stanford Professor to teach his Machine Learning course to 100,000 students in a traditional classroom?

If you said 250 years, you’re right! Until very recently, higher education was three things: exclusive, very expensive, and location dependent. Coursera changed all that, making courses at top universities free to anyone with an internet connection.

Take advantage of the versatility of the World Wide Web. Let your team members train at their own paces.

The one-hour lecture is so 20th Break up the lesson into eight to twelve minute segments organized by theme.

Online training gives you a lot of data, which you can use to improve the learning experience.

“What’s the worst that could happen?”

The author of The Four Hour Workweek has plenty of time on his hands, but he doesn’t want to waste it learning things the hard way. Ferris is dedicated to finding effective shortcuts in the learning process for better results with less time and effort. His strategy has helped him learn Japanese in less than a year, overcome a fear of swimming in the ocean, and secure a world record for number of tango spins in one minute.

He may have also served as inspiration for Dos Equis’ Most Interesting Man in the World.

Challenge basic assumptions about the learning process (and life in general for that matter.)

The masters of a given skill aren’t always the best teachers. (Lookup Ryan Lochte’s swimming lessons).

Optimize learning, make it hackable. Empower your students to innovate the process.

The amazing thing about TED talks is the way they have made learning into entertainment that can compete with whatever else we’ve got going on in our dozens of open tabs. Great training should do the same.