Home » Blog » How to Remove Unconscious Bias for Improved eLearning 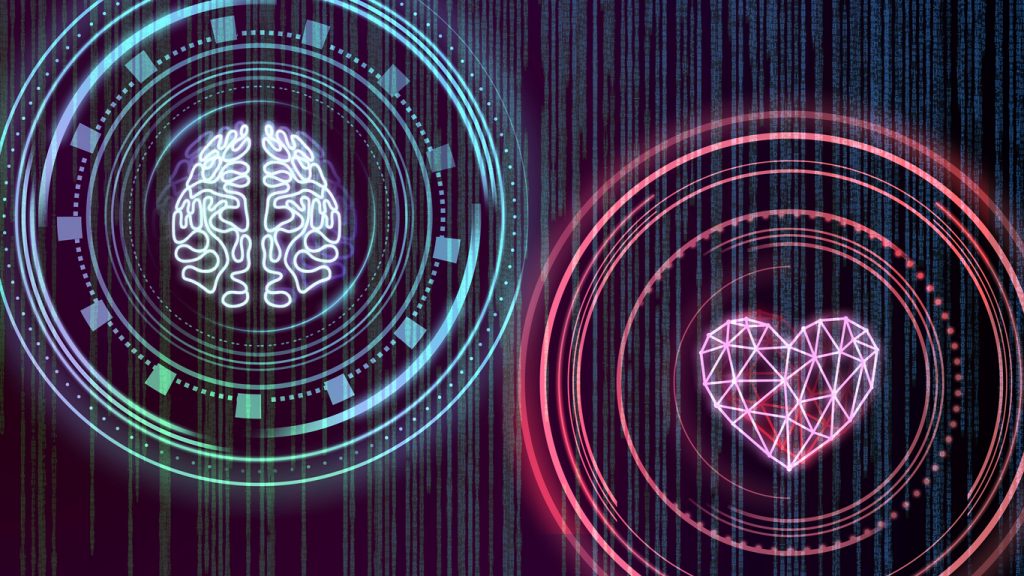 It’s been a privilege for us at ThinkingKap to have worked on as many Diversity & Inclusion courses as we have over the years. I care deeply about accountability and keeping peoples’ biases in check. I pride myself on being an extremely objective person (at times too much so) and would love to think that I am without biases. But I know that’s not the case. Nobody is. And while that in itself presents somewhat of a problem, it’s more about how we proceed from there. Do we blindly follow our unconscious bias? Or do we step back, acknowledge our initial inclination may not have been objective, and make a more balanced decision?

Unconscious bias refers to a bias that we’re not aware of, and happens “automatically” when we’re presented with new information. It most commonly refers to workplace issues, often in conjunction with diversity and inclusion training. So what does this have to do with eLearning? How can these biases manifest themselves in our courses? What is the potential impact? And how do we ensure we avoid it? Stay tuned because you may be creating (or perpetuating) an issue where you didn’t even realize you had one.

Why Does Unconscious Bias Exist?

To understand this, we first need to understand some things about our brains. They’re amazing, but they’re not perfect. They have limitations. For example, we’re presented with roughly 11 million individual pieces of information per second. That’s an insane amount of data! In reality, our brains are only capable of consciously capturing about 40 pieces of information per second. And from that, it really only processes 5-7 of those. Our brain is built to understand this “inefficiency” and it takes shortcuts to compensate. In order to preserve processing power for “important decisions”, our brain takes opportunities to bypass our consciousness.

Think about the number of things you do on “autopilot” over the course of a day; repetitive tasks like driving to work or walking around your neighborhood. Because your brain has so many potential things it could focus on, it finds every opportunity to automate certain tasks with your subconscious. Unconscious bias fits under this broad umbrella of tactics your brain uses to free up bandwidth from your conscious brain for “more important” tasks.

So What is Unconscious Bias? 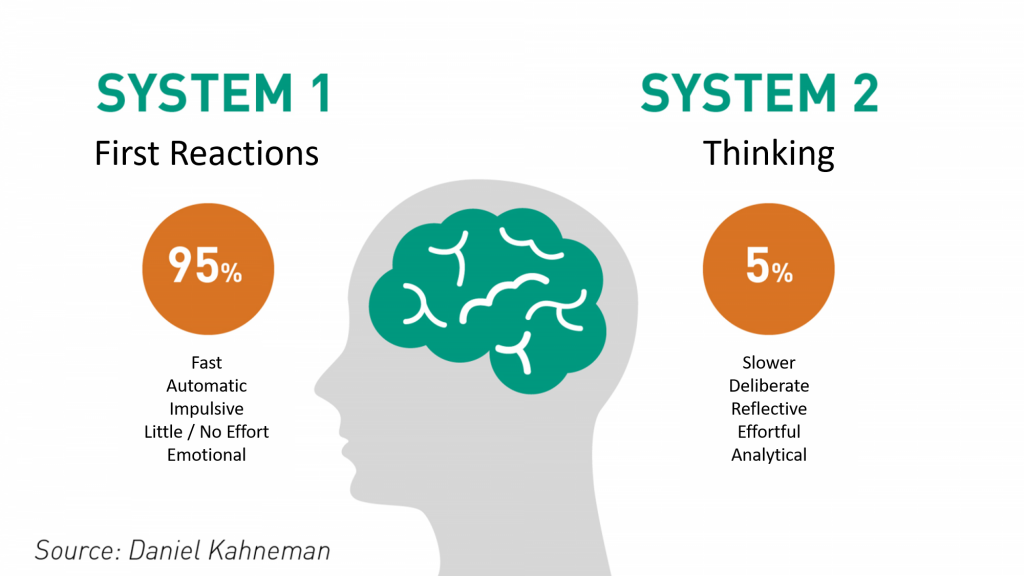 So what does this mean? Well, our brain has determined that most of the decisions we have to make throughout the day are not life-altering. So, for anything deemed “routine”, it uses system 1 processing. These consist of our first impressions and any other instinctual thinking. Our brain takes all the information it has on hand, and generates an instantaneous reaction. This is where unconscious bias comes into play.

These biases are ingrained, and perpetuated, starting at a very young age. Let’s use gender as an example. We identify a baby’s gender by color. We promote very different toys for boys versus girls to play with. Children are introduced to different sports (if the girls are even introduced to sports). Boys are more promoted than girls in subjects like math and science. Boys are encouraged to be tough, while girls are implored to be sweet. On, and on, and on.

Unfortunately, biases are cultivated throughout our lives. And obviously not just for gender. Society and media play a significant role in shaping stereotypes for gender, race, religion, sexual orientation, profession, income level, etc. All of these feed into our unconscious biases, and form the basis of the system 1 decisions we make.

What Are the Implications of Unconscious Bias?

Make no mistake, the implications are society-wide. But since we’re leading toward unconscious bias in training, we’ll limit implications to the workplace. Let’s start with a true story about a good friend of mine.

This friend is an insanely smart female. She’s an aeronautical engineer and is part of management for an aerospace company. She reports directly to the CEO, as do 3 males in similar positions. Whenever they all meet, the CEO expects someone to take notes. It’s always delegated to her. When she asked why none of the guys are ever the note-taker, she was told “because you’re best at it.”

In the grand scheme of workplace inequities, is this a HUGE infraction? No. But it perpetuates stereotypes that women are the secretaries, while the men do the talking and the thinking. There was so much of this around the company that HR asked my friend to conduct a training session on unconscious bias. After the training, the CEO said, “I didn’t understand anything you just talked about.” To which the HR Director replied, “Well, I guess that was the point.”

Unconscious bias is exactly that…unconscious. While this is explicitly different from conscious prejudice, the impact can be the same.

Say a hiring manager wants to hire the best people, but never hires anyone under 30 because he thinks they’re not experienced enough. Or a manager of a multi-cultural team shelters certain team members from meetings because they don’t speak perfect English. Or envision a single mother who’s not considered for a promotion because it requires travel and the manager doesn’t want to separate her from her child. These are all examples of unconscious bias. They directly impede the target. But they also hold back the company from finding and utilizing the best talent. Everybody loses!

What Does This Have to do With eLearning?

So at this point, hopefully you understand what unconscious bias is. And hopefully you recognize how this is an issue in the workplace. But you may still be wondering what this has to do with eLearning. Training doesn’t have thoughts or feelings. Training doesn’t make hiring decisions. It doesn’t deny people opportunities. It’s just there; a reflection of the author, and the company that created it. And therein lies the risk.

As training creators, we serve many masters. We need to answer to the project stakeholder, the company’s culture, the subject matter experts, etc. All of these inputs come with their own potential biases. On top of that, we have our own biases that could come into play. Which SMEs do we involve? When we get conflicting answers, who’s do we go with? What characters do we present in our scenarios? How do we represent them? The list goes on, and they all have the potential to create new biases, or support existing ones, within the organization.

Preventing Your Own Unconscious Bias

The best thing you can do to prevent your unconscious bias, is to increase awareness. This includes learning about different types of biases and being honest with yourself about the types of stereotypes that impact you. It can also help to uncover your unconscious biases with the Implicit Association Test, presented by Harvard University. The test measures the strength of connections you make between concepts and stereotypes.

Another way to heighten your awareness is to understand the most common biases that could interfere with you during your project. Here are 3 of the most common:

Once you have awareness, self-reflection can help you overcome your biases. For example, it can help if you think about times you might have been influenced by your bias, and how you might have improved your decision-making. What could you have done differently? How might that have turned out instead?

It also helps to identify your triggers. Are there certain people, places, or situations that tend to elicit biased responses from you. Paying attention to choices you make when you’re tired, stressed, or rushed can also point you to times you’re more likely to fall back on preconceived notions. In the end, slow down. Taking a breath before making a snap decision can allow your more rational side to take over.

How Do We Prevent Biases From Impacting Our eLearning?

As the creator of the course, it’s our primary responsibility to be impartial. We need to be aware to not introduce our own biases. Beyond that, it’s our responsibility to filter out the biases of the various sources. This can be a tricky balance for sure. Say we’re creating a training course for a group of engineers at a given company. At this company the engineers happen to be primarily male. How do we create the proper balance between a scenario reflecting the audience (male), without perpetuating the stereotype that typically only men are engineers?

These portrayals can come in the form of gender, race, etc. There are tons of similar examples, where the reality at a particular company mirrors the stereotype. Does this make it OK to model the stereotype in company-sponsored training? On the flip-side, is it worth alienating (or at least disengaging) the audience by forcing an unrepresentative facsimile into your course? As with most things, the answer lies somewhere in the middle. There’s no single correct answer.

It’s typically not (almost never) our responsibility as a training professional to be the culture police. And depending on our relationship with the stakeholders, this tolerance changes. If we’re an employee in the department, it’s one thing. It’s something different if we work in the HR or training department. It’s altogether another thing if we’re an external contractor. The first question is “is there a champion among the stakeholders?” If so, our raising the issue could initiate a negotiation of sorts. If not, your relation to the stakeholders will drive how much you can initiate this negotiation.

Unconscious Bias Has No Place in Your Training

Like it or not, our training courses send a message, and it isn’t always one we intend to send. Step one is to take a breath and make sure we’re being as objective as we can about our decisions. Beyond that, as the person crafting the course, we need to help facilitate the same measured approach to what our course portrays. If we do this, we can ensure our courses are inclusive to all learners.